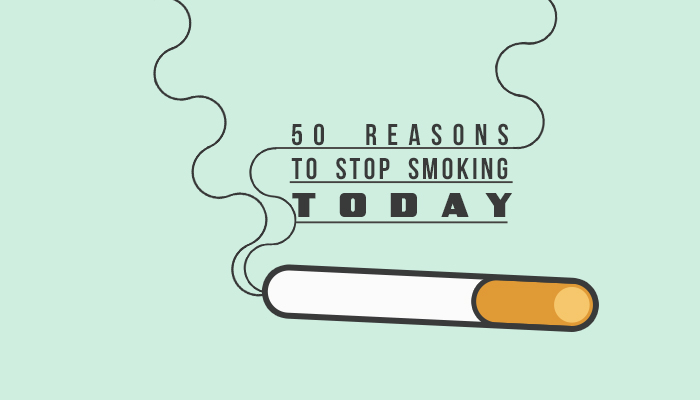 1. LUNG CANCER: Smoking is the number one cause of lung cancer.
2. HEART DISEASE: One out of every 5 heart disease deaths’ is directly related to smoking.
3. DIABETES: Smoking causes type 2 diabetes.
4. LIVER CANCER: Smoking increases your risk of developing liver cancer.
5. ERECTILE DYSFUNCTION: Smoking builds up in plaque in the arteries and obstructs blood flow.
6. ECTOPIC PREGNANCY: Around 11% of these types of pregnancies can be directly associated to smoking.
7. VISION LOSS: Studies have shown that smoking increases the risk of cataracts and glaucoma.
8. TUBERCULOSIS: If you have been treated for tuberculosis in the past, smoking doubles your chance of getting it again.
9. RHEUMATOID ARTHRITUS: Smoking increases your likelihood of developing rheumatoid arthritis.
10. COLORECTAL CANCER: Those who smoke are more likely to die from colorectal cancer.
11. SECONDHAND SMOKE: Each year in the US, second-hand smoke causes 42000 deaths from heart disease and 3400 deaths from lung cancer.
12. MEDICAL CARE: It was reported that R289 billion rand was spent on medical care for smokers in one year.
13. LOSS OF YEARS OF LIFE: People who smoke can lose more than 10 years of their life.
14. STROKE: Smoking makes the blood thicker and more likely to clot, causing strokes.
15. BLADDER CANCER: The number one risk factor for bladder cancer is smoking.
16. CERVICAL CANCER: The risk of developing cervical cancer doubles in women who smoke.
17. IMMUNE SYSTEM: Smoking depresses antibodies and cells in the body that are supposed to help fight off invaders.
18. CLEFT PALATES: Smoking during pregnancy increases the likelihood of having a baby with a cleft palate.
19. CANCER TREATMENT: Smoking increases the chances that a cancer treatment will fail.
20. INCREASED ILLNESS: Smoking increases your chances of picking up common illnesses.
21. YOUTHFUL APPEARANCE: Smoking makes your skin look older and more haggard. It also discolours your fingernails and teeth.
22. MONEY: After one year, you will have saved around R20000 if you quit smoking.
23. TIME: Quitting alleviates the worry about when you will be able to smoke next.
24. SMELLS: Quitting will make your clothes, kids, car and house smell better.
25. FAMILY: Second-hand smoking is dangerous for the health of people around.
26. ANIMAL TESTING: Animals were used to test the dangers of smoking the US.
27. BETTER SLEEP: Smoking keeps you from falling into a deep sleep.
28. STRONGER BONES: Studies have shown that smoking increases the risk of osteoporosis and fractures.
29. HEARING LOSS: People who smoke are 70% more likely to suffer from hearing loss.
30. VACATIONS: England, France, New Zealand and Puerto Rico now only offer smoke-free bars and restaurants.
31. PSORIASIS: Smoking can increase the risk of developing psoriasis.
32. WARMER HANDS AND FEET: Poor circulation is another symptom of smoking.
33. LESS CAFFEINE: When you smoke, your body requires almost twice as much caffeine.
34. SAFER BIRTH CONTROL: Smoking while taking a form of contraceptive increases a woman’s risk of severe side effects.
35. CROHN’S DISEASE: People who smoke have a higher risk factor for developing Crohn’s disease.
36. ACID REFLUX: Cigarettes can cause heartburn.
37. EAT LESS: Studies have shown that smoking makes you eat more.
38. INTERIOR DESIGN: Cigarette smoke causes yellow staining on the walls in the house of a smoker.
39. HAIR: Smoking can cause premature baldness and lower the age at which hair begins to turn grey.
40. PETS: Not only can second-hand smoke harm your family and kids, but it can also hurt your pets.
41. LIFE INSURANCE: Life insurance rates are 20 to 30% lower for non-smokers.
42. FASTER HEALING WOUNDS: Smoking causes wounds to heal slower because it reduces blood flow to the skin.
43. SUDDEN INFANT DEATH SYNDROME: The cancer causing chemicals in second-hand smoke also effect infants, damaging their lungs, hearts and brains.
44. MENOPAUSE: Women who smoke have more hot flashes as they proceed through menopause.
45. INCREASED SPERM: Smoking damages sperm cells and makes them less able to fertilize an egg.
46. RELATIONSHIPS: A Match.com poll discovered that 58% of their users would not date a person who smokes cigarettes.
47. DEMENTIA: Smoking is a significant factor for vascular dementia.
48. FERTILITY: Women who smoke face a faster loss rate for their fertile eggs when they smoke.
49. ALZHEIMER’S DISEASE: The mental decline in elderly smokers is five times faster than in elderly non-smokers.
50. LUPUS: Studies have shown that smoking increases the risk of developing lupus.

Additional sources listing the dangers of smoking tobacco cigarettes:
World No Tobacco Day
Smoking tied to higher risk of hearing loss
24 REASONS TO SHOW YOUR LUNGS SOME LOVE
Is Smoking Dragging You Down?
Factors That Could Damage Your Liver
Nicotine in Cigarette Smoke Causes Yellow Nail Stains