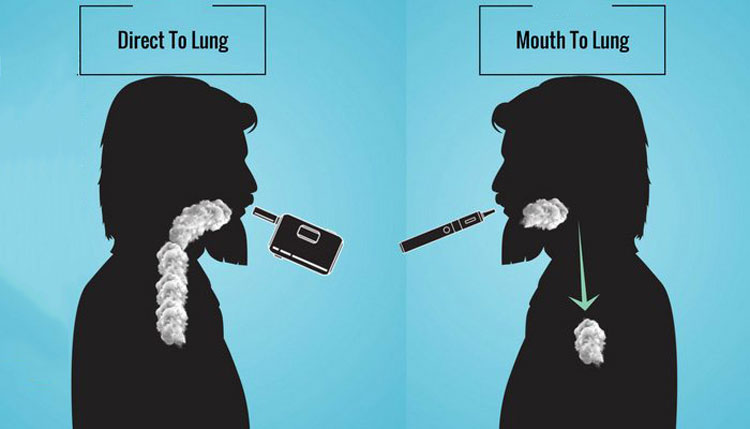 WHAT IS A VAPE?

The definition of vaping is the act of inhaling smoke looking vapor from an electronic cigarette or vaping device with the similar action as hand-to-mouth smoking, what some would consider a technical solution to conventional nicotine and tobacco dependency. Vaping simulates smoking but in a far less harmful manner, a flavored nicotine liquid called vape juice/e-juice is whats in a vape but not all vapes contain nicotine. The user decides the flavor and amount of nicotine that they wish to use, if any at all.

HOW DOES A VAPE WORK?

Ideally all vapes work on the same premise – a power supply in the form of a battery or vape mod which powers a heating element(coil) that vaporizes e-juice in a smaller chamber also known as the atomizer. The user then inhales the vapor through a small mouth piece.
Only with all of the components, is it a functional vaping device. No one part is considered the vape. Most experienced users shop a la carte for mixing and matching vape parts, although it is advised for beginners to stick to pre-packaged kits that contain everything to ensure appropriate compatibility.

An overly simple question that needs an answer.
There are many reasons as to why vaping is different from regular cigarette smoking.
MTL vaping is made to resemble cigarette smoking but with a difference;
– A smooth slightly longer draw is required compared to smoking ciggies
– Once the vapor is in the mouth, inhale to your lungs drawing air in at the same time.
– Exhale

Most people have no interest in spewing out massive clouds of vapor, generally speaking its more for those that want something as close to the smoking experience as they can get. Reasonably one can only fit so much breath in your mouth at one given time therefore the MTL method wont have you producing much vapor at all, with that being said MTL vaping is great for flavor.
Many simply have no choice but to take the MTL route due to the years of smoking and the state of their lungs they,re unable to take a full on direct lung hit.
MTL vaping has proven to certainly be more economical as the devices use less e-liquid than sub-ohm atomizer, the latter of which is predominantly used for direct-lung draws. With these usually tiny devices its easy to go super stealthy like when your trapped in a high-strung crowd and in need of a soul-fix, the so called ‘stealth vape’ involves not only the clenched fist(to hide your device) but also the infamous MTL hit, if need be you could keep the inhaled vapor in your lungs for an extra few seconds; exhale the nearly invisible plumes and savor the angst, thank me later!

Essentially because you are consuming the product, you should be aware of the e-juice composition and also because MTL greatly differs from DL vaping you can afford to use a slightly higher nicotine packed e-juice without making yourself ill.
Personally I prefer to use either 10mg or 12mg nicotine, other reviewers here use 6mg, 14mg or even 20mg. Ultimately it will depend on your needs or preference. If you’re a recent cigarette quitter, you will most likely want to opt for a nicotine strength between 10mg and 20mg nicotine. At first it will take some time experimenting to find your suited nicotine strength and favorite flavor profile.

If you’re purchasing a new device and your budget allows.
buy both a 6mg and a 14mg e-liquid at the same time,
that way if one isn’t for you then you wont need to drive
out again or to wait days for your new e-juice to be delivered.

Alternatively the next option is to use nicotine salt based e-liquid. Despite the high nicotine content usually being at 25mg there’s also 50mg and everything in-between, this type of e-liquid provides the user with a smoother more manageable throat hit.
Important to remember that nicotine salts also absorb into the bloodstream quicker and more effectively than standard freebase e-liquid giving you a slightly increased nicotine hit.

Choosing the wrong PG/VG e-juice ratio for the first time users can make or break the experience. PG and VG are the two main ingredients in your favorite e-liquid.
– PG – PROPYLENE GLYCOL
– VG – VEGETABLE GLYCERIN
The devices that support MTL hits are usually only suited to a higher PG content which in fact is also known to be a good flavor carrier and usually whats used as a thinner whereas VG is of a thicker consistency and produces a dense looking vapor. I’ve also found that a stronger nicotine strength can be the main contributor to an increased throat hit.
Also, because this is considered a suitable smoking replacement as the throat hit from a higher PG based e-juice will probably be more satisfactory to this type of vaper.

PG and VG Ratios for MTL

The airflow on your atomizer is generally a deciding factor in whether you’re going to be direct inhaling or mouth to lung inhaling, a tight airflow also provides a warmer vape and the most noticeable differences between an MTL or DL atomizer would be the mouthpiece and overall size of the atty. On an MTL tank the mouthpiece will be a lot narrower made to mimic the act of smoking whereas the mouthpiece on a DL tank will be a lot wider allowing for more vapor to be inhaled.

Low resistance coils are usually made with thicker wire whereas lower resistance coils made for MTL vaping are made with thinner wires that don’t allow as much power/wattage to be fed to the coil than a lower resistance DL coil would.
For this reason MTL vaping is best suited for use on the lower wattage scale on box mods or vape pen styled devices. I have vaped anywhere between 11 watts and 20 watts with clearomisers or tanks with a resistance above 1.0ohms.
Its likely, if you’re starting out and purchasing a vape pen styled e-cig or pod system, that the kit you choose will have a fixed wattage and will be set to work perfectly with the matching tank or coil that is provided in the kit. Fixed wattage devices provide a hand’s off vaping experience and are a great starting point so don’t stress too much about having to learn that extra step of as variable wattage device. Larger sub-ohm atomizers have often been known to come out with an extra MTL drip-tip that is narrower than usual as well as adjustable airflow and this means you should be able to enjoy an MTL or stealth hit with a coil rated at 0.7 – 0.9ohm, one such an atomizer that works great with a 0.7ohm coil and MTL vaping is the ASPIRE NAUTILUS 2 which is highly recommended and available here at Vape Africa.

So… if you’re vaping for a nicotine fix, the Mouth-To-Lung method is definitely for you. Rest assured, Vap3 has you covered!

How does one vape DL?!
It will take some getting use to as this form of vaping is the polar opposite to the MTL style and will be a completely foreign concept for most.
– Draw slow and steady directly into your lungs
– A DL draw can be 3-5 seconds or longer.
– Once it reaches your lungs, exhale those clouds of vapor.

If you’re the type to fancy a full, creamy and thick load of cumulonimbus clouds and a solid lungful of tasty vapor, then you’re going to need to hit that fog straight to your lungs!
Only with a direct lung hit can you enjoy the scope of a high wattage mod and sub-ohm atomizer, see any real vapor production, perform tricks or cloud chase and really experience the full flavor profile of an e-juice on exhale.
Direct lung vaping is for lovers of vaping who’ve completely overcome their cigarette craving, its for vapers, like me who loves the magic of exhaling rich clouds and messing around with high-powered box-mods.
It will at first be a shock to your lungs but over time, if you start at a lower wattage and tight airflow and but slowly opening it up, your lungs will learn to love it. You’ll feel like an invincible, weather controlling superhero most of the time as the young folk will admire you, old folks will look at you strangely and you’ll annoy the crap out of your other half when binge watching your favorite box set.
Either way, the devices that go along with using this method will bring you joy; like the opportunities for sampling new and scrumptious flavors that will turn you into a kid-in-a-candy-store.
As you’re able to tell, I am a fan of the plume producing cumulonimbus joy that is the DL vape hit… And I thank you, vape gods.

As far as PG and VG go, direct lung devices are more suited to a higher VG ratio that produces a far more satisfying and smooth vaping experience. VG will be easier on your lungs, very easy in my experience. Vape smart and enjoy vaping for what it is, for me its proven to be a tastier and a far more entertaining venture than smoking will ever be!

Through the adjustable ring on the top or the base of your atomizer, will you be able to determine whether you prefer a restricted draw or not. An open airflow means that whilst you inhale your vapor, more air is allowed to flow through the tank and into your lungs unrestricted. You’ll notice that as you open it up, your hit will become longer and easier and so will your cloud production.
Closing up your airflow will result in a intense, warmer and slightly restricted vape. This can also bump up that flavor just a touch.

Remember, if you’re inclined to draw in slowly you should use a medium airflow so that the vapor doesn’t become too hot – As with anything vape related, its all about testing and finding your sweet spot.

Now that you have two more acronyms to blab, you can set about exploring new devices, forget smoking forever and all-round living a healthier life.
Whatever method of vaping you choose, it will be down to your personal preference. Just remember any type of vaping is good if it helps you make the switch, whether that means using a cig-a-like vape or building your own coils.
Hopefully with all that was said you’re a little clearer on what the difference between mouth to lung and direct lung vaping styles are.
Of cause, any questions please feel free to ask away, Vape Africa has you sorted!